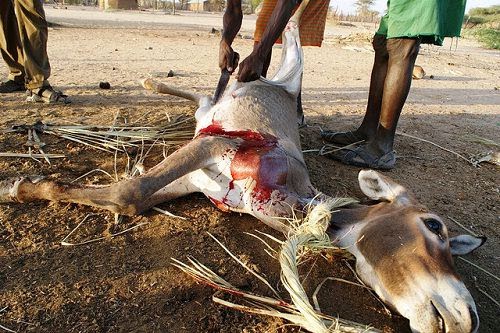 In most undeveloped areas, donkeys have been used as means of transport to ferry goods, to guard sheep or cows and they are believed to survive below extreme levels. They are actually considered as aide in human toil, therefore, reflected as working animal.


They might be too considered as stubborn; nonetheless, studies show that they are quite intelligent, vigilant, welcoming, bouncy and willing to learn.

However, there have been a lot of sagas surrounding donkey and its meat. Cases of Donkey slaughtered secretly ‘illegally’ and put in marketplaces for human consumption in different parts of the country has been on the rise. In this case, police and Ministries issuing firm notice against the felons who expose unsuspecting locals to Donkey meat.
It has provoked a lot of reactions and people have taken to the street to oppose the slaughtering and sale of Donkey meat, claiming, it’s not even amongst the itemized kind of animals in the Bible to be eaten.

It has arisen as a shock that really, it is lawful to butcher and consume Donkey meat in Kenya.
Animal Rights Association of Kenya gave the go ahead to publish it as legal meat right for human consumption to allow it be traded easily like other meets..

After all, if countries like Italy, a few donkeys are raised for milk and meat and in Europe too Donkey meat is among the ingredient in any dish, why not us?
Post a Comment
Labels#NEWS
Newer
Older