Pharrell Williams Cries After Oprah Showed Him A Vidoe Of Publics Dancing To His Hit Song ‘Happy’. 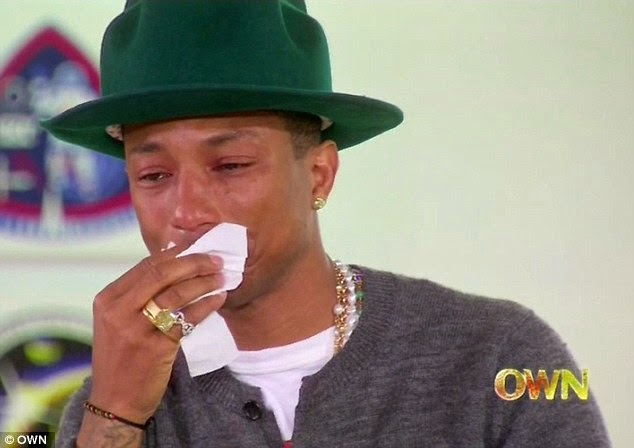 Pharrell Williams got emotional during Oprah’s OWN Network interview, as they got down discussing his frosting song ‘Happy’. He was stirred by a compiled video shown to him of people dancing to his hit song and broke down into tears. Apparently, the clips overwhelmed the Grammy Winner and he started crying.

He went on to say’ “it’s overwhelming because I love what I do and I just appreciate the fact that people have believed in me for so long that I could make it to this point.’
Pharrell conferred the massive and speedy attainment of his track Happy, which has sold over 1.23 million copies and attracted more than 180 million views on youtube.

Happy, written and produced by Pharrell was released on 21st November 2013 from the Despicable Me 2 Soundtrack Album, and it serves as the principal sole from Williams’ second Studio album, G I R L (2014).

People have twisted the song to their own interpretations which has made it a hit.

NTV Kenya Staff too dance to the Song Happy, Check out