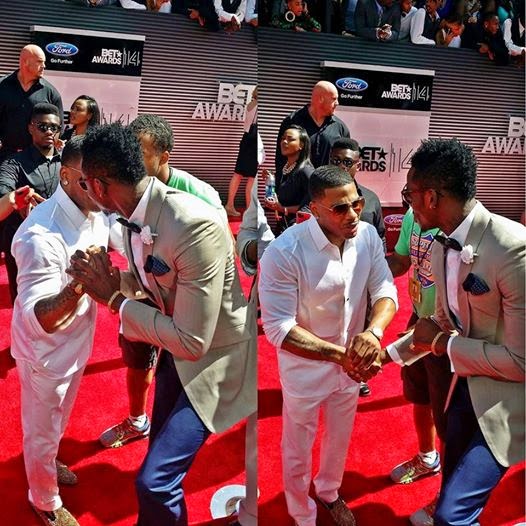 Tanzanian Superstar Diamond Platnumz had the opportunity to share, network and exchange ideas with some of the biggest international Celebrities - Celebrities he has admired since he was a little boy.

Well, he didn’t win any award at the BET, but had his moments too, sharing the BET Award’s Red Carpet with Nelly and big names in music world was such a great opportunity he believes, a chance that will reinforce his beliefs and trusts though his music career.

Diamond, who was nominated in the Best International Act - Africa, an award his close friend Davido from Nigeria took home on Sunday at the Nokia Theatre, Los Angeles. Other Africa nominees in the same category were Mafikizolo (South Africa), Sarkodie (Ghana), Tiwa Savage (Nigeria) and Toofan from Togo.
Some of other Africa winners include Adeleke (UK) and Nigerian born actor Chiwetel Ejiofor but not without the Kenya’s actress, Lupita Nyong’o taking home the Best Actress beating Angela Bassett, Gabrielle Union, Kelly Washington and Oprah Winfrey.

The pop superstar Beyoncé was the winner of the night, scooping three awards.

Check out the full List of the BET Award winners below:.